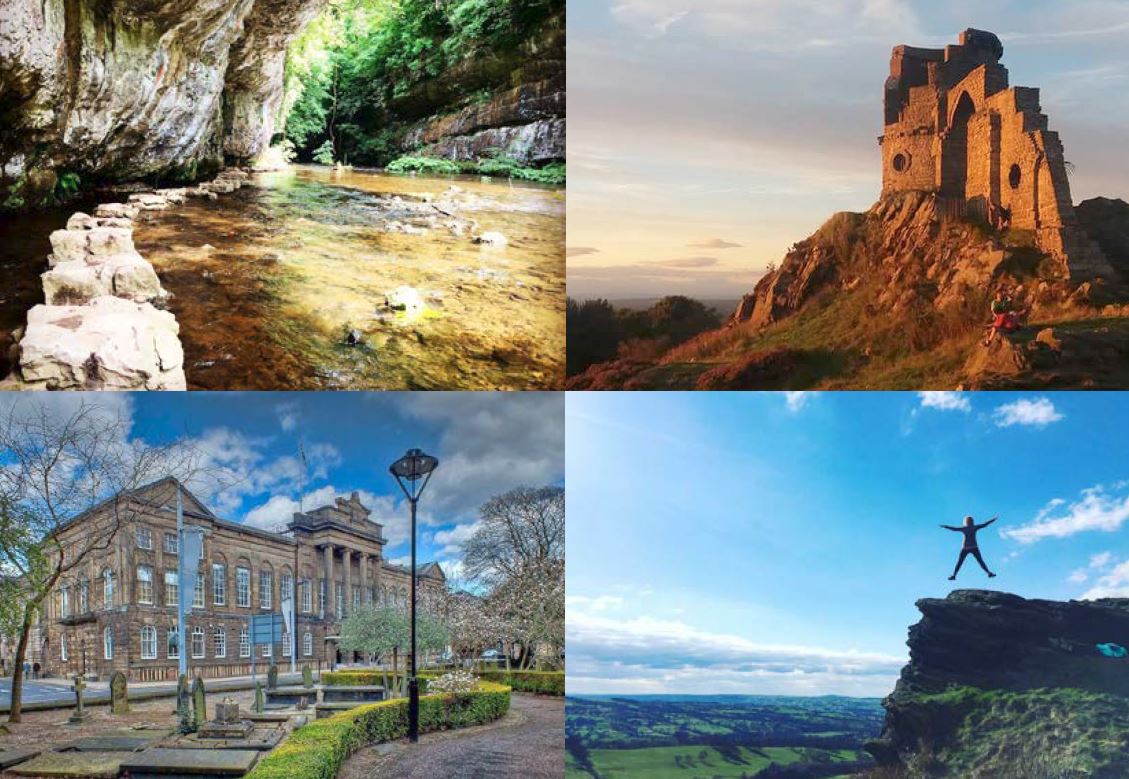 University Hospitals of North Midlands NHS Trust (UHNM) sits in the centre of Staffordshire, with Derbyshire, Cheshire and Shropshire all within easy commuting distance. Across the region there are beautiful towns and villages surrounding the historic industrial city of Stoke-on-Trent and the county town of Stafford, where the Trust’s hospitals are located.

The Trust attracts NHS staff nationally and internationally as it is one of only 21 university teaching hospitals in the country. UHNM is also one of the largest acute trusts nationally with over 11,000 staff, including 450 consultants – many involved in cutting edge research. A new hospital built in Stoke-on-Trent in 2011 and a complete refurbishment of County Hospital in 2016 means the Trust really is a fantastic place to maintain or build a career.

The area also has an abundance of excellent schools, a wide variety of housing, every amenity possible and the friendliest people in the country. If you do need to escape this beautiful part of the world, the large metropolitan cities of Manchester and Birmingham are a stone’s throw away, each with an international airport. And with London just 90 minutes on the train down the west coast mainline, which serves both our hospitals, the North Midlands really is the place to be to work and live.

Staffordshire is a predominantly rural county with the county town of Stafford sitting in the centre. It
is surrounded by thriving market towns and villages, offering plentiful shopping, the historic Stafford
Castle, the Shugborough Estate, museums, galleries and family attractions. Each year Stafford is also
home to numerous events, including the acclaimed annual Shakespeare Festival, Stafford Art Festival
and the County Show.
There are plenty of opportunities to walk, cycle or ride through acres of stunning countryside,
including the towering crags of The Roaches, the heather heathland and rolling hills of Cannock
Chase an Area of Outstanding Natural Beauty. There is also the leafy woodland and farmland of the
National Forest, numerous peaceful canal paths running through the whole of Staffordshire, and
lakes including Chasewater and Lake Rudyard. One of the UK’s best visitor attractions is based in
Staffordshire, the theme park of Alton Towers.
Stafford and neighbouring Stone are beautiful market towns. But if idyllic villages are your thing,
they are surrounded by the villages of Eccleshall, Abbots Bromley and Acton Trussell, all within
easy driving distance. Central Staffordshire has numerous excellent schools to choose from. County
Hospital is located right at the heart of the County. 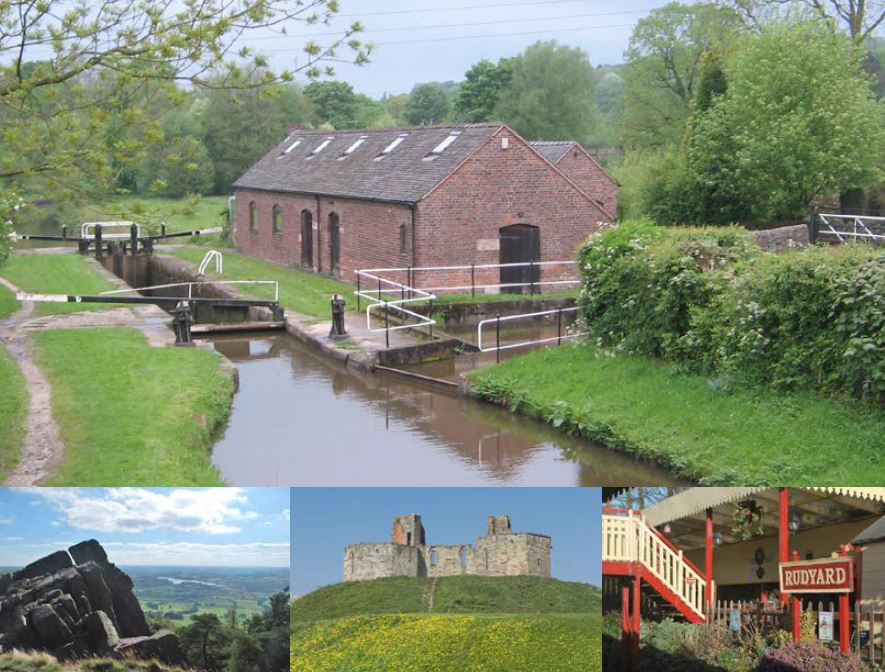 Cheshire borders the North Midlands and is within easy access of Royal Stoke University Hospital. It is
an area bursting with many quaint market towns and villages with independent shops, galleries and
markets. The Cheshire plain and countryside alone is dotted with sought after places to live, including
the towns of Knutsford, Alderley Edge, Nantwich, Middlewich, Sandbach and Alsager.
Many of the towns and villages are linked by the Cheshire ring of canals that run through the county
– the Macclesfield Canal, the Trent and Mersey canal and the Bridgewater Canal. There are plenty
of places to walk, cycle or ride, including White Nancy - an iconic Grade II listed folly, the woods of
Alderley Edge to Stormy Point, the Griststone Trail and Sandstone Trail in Macclesfield Forest.
The southern towns of Cheshire are just a 30 minute commute to Royal Stoke and Alderley Edge
and Knutsford a further 10 minutes away. There are a large variety of excellent comprehensive and
private schools in Cheshire and many of our staff live in this area for these reasons. 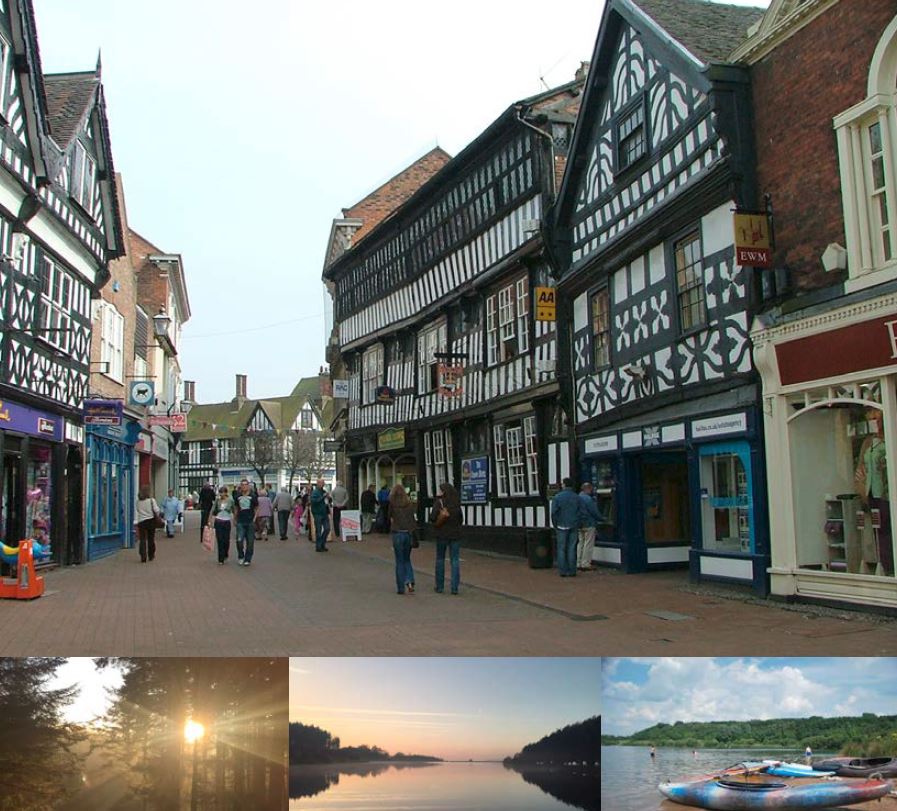 Shropshire, an area that is a quiet, unspoilt and rural compared to other parts of the North Midlands,
sits on the west of the region. Although tranquil, Shropshire has many traditional market towns and
villages, including Market Drayton, Loggerheads and Ashley. Shropshire is a landscape unique and
great for walking and exploring, with vast unspoilt countryside to explore from the Shropshire Hills,
Meres and Mosses wetlands and the Shropshire Union and Llangollen canals. 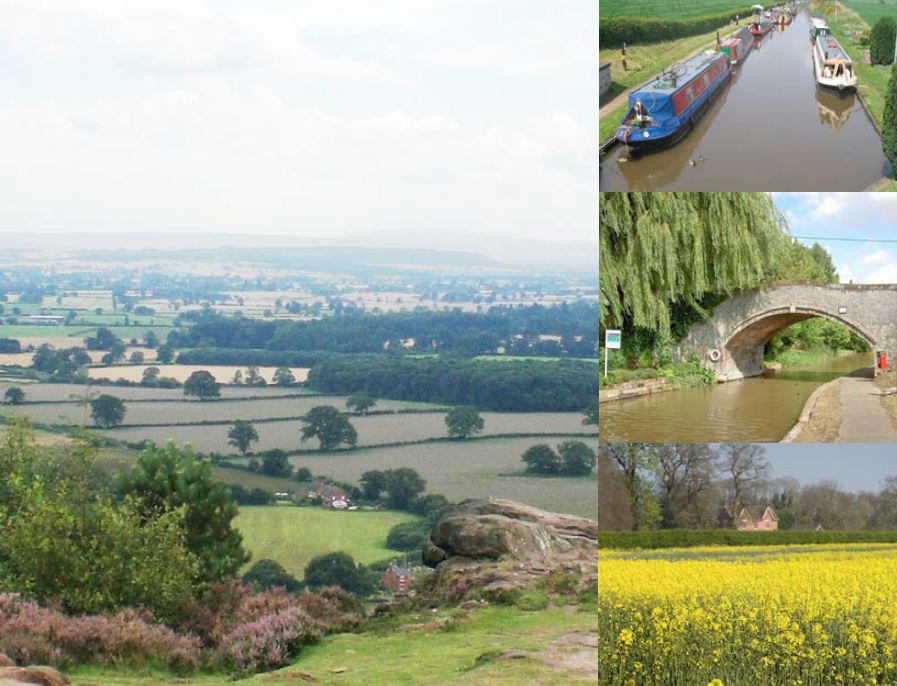 Derbyshire and the Peak District

Derbyshire and the Peak District sits on the North East of the region. As the very first National Park,
the area is famous for the great outdoors, covering over 500 square miles in total. The Peak District
offers a variety of countryside to explore and is rich in wildlife, with many dales and valleys, rock
faces and caves, lakes, rivers and streams and vast woodlands.
The market town of Leek sits on the edge of the Peak District, and many of our staff live in the town
or surrounding villages. It’s an ideal place for those who want to live with amenities, but within easy
striking distance of the best rugged countryside. Every year staff from the hospitals take part in the
Rudyard Dragon Boat race on nearby stunning Rudyard Lake. 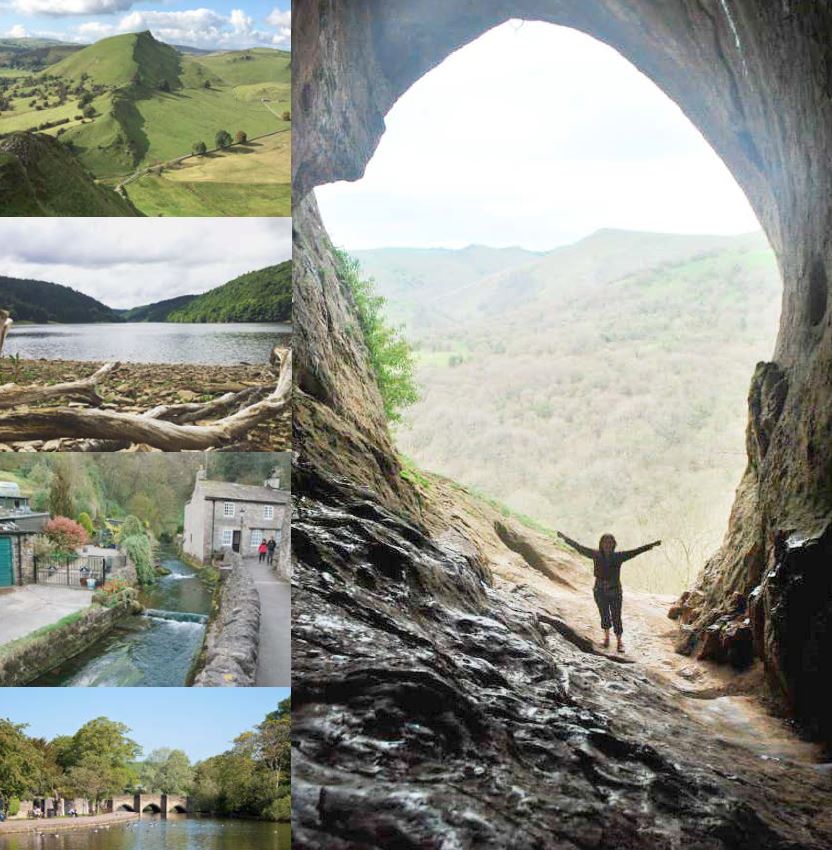 Stoke-on-Trent is the World Capital of Ceramics, a place where the skyline was once dominated by hundreds of distinct pottery kilns. Today people visit the city to explore the history of ceramics and the pottery industry with numerous visitor centres, museums and factory shops. Due to its heritage and industry, the city is affectionately known as The Potteries. Adjoining the city is Newcastle-under-Lyme – with Royal Stoke University Hospital sitting on the border of both. Stoke-on-Trent is a unique city that was originally formed by the grouping of six towns – Stoke, Hanley, Fenton, Longton, Burlsem, and Tunstall. The city is the cultural hub of the region, with entertainment and events throughout the year, including shows for theatre lovers at the Victoria Hall, The Regent Theatre and The New Vic Theatre. There is plenty to do for families at the Trentham Estate with the magnificent Trentham Gardens, Shopping Village and Monkey Forest. Older children will enjoy splashing around at Stoke-on-Trent’s indoor aqua park, Waterworld, or
enjoying the snow at the Stoke Ski Centre. And for sports lovers, the city hosts Premier League football club Stoke City, and football league club
Port Vale FC. Stoke-on-Trent was one of the great cities of Victorian England. With its location in the heart of England, Stoke-on-Trent boasts quick and
convenient links with most major cities in the UK. Situated just 90 minutes by train to London Euston and under an hour to Birmingham, Manchester and Liverpool. The city is ringed by a vast number of smaller villages in northern Staffordshire if city living isn’t for you. Hanchurch, Betley, Woore & Audlem, Keele, Madeley, Whitmore & Baldwins Gate, Maer, Trentham & Barlaston, Stallington & Fulford, Stockton Brook, Stanley, Bagnall and Endon are just a few…we could go on. All of which are a short drive from Royal Stoke University Hospital. 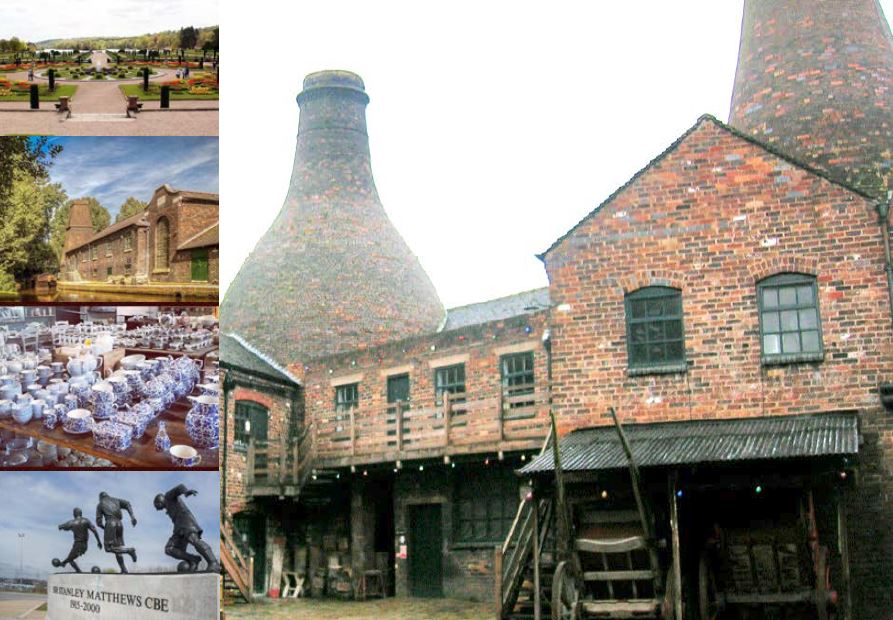 Stoke-on-Trent is bidding for the title of UK City of Culture in 2021. We love Stoke-on-Trent and believe that becoming City of Culture will bring huge benefits to our area; for the people who live and work here, the businesses that are based here and for future generations. Whether it’s eating an ‘oatcake’, going to a football match, listening to music at the highly acclaimed Sugarmill, watching some theatre at The Regent, visiting the beautifully restored spitfire at the Potteries Museum & Art Gallery or throwing a pot at Gladstone, culture in one sense or another drips from every pore in the city.
Across six towns and one city, built on a history of industrial greatness, we’re now seeing a resurgence of all the things that made this place great.

One of the country’s major motorways, the M6, links Stoke and Stafford to the north and south. Both Stoke and Stafford are served by two major junctions, and the A50 provides a direct link from the M1 and the East of the country. A major duel carriageway, the A34, links the two hospitals.
Each of our hospitals is within a short distance of a major railway station on the West Coast Mainline, which links London and Birmingham in the south to Manchester in the north and Edinburgh in Scotland. Royal Stoke University Hospital is located approximately 2 miles from Stoke-on-Trent train station, and County 2 miles from Stafford train station. The two stations are only 20 minutes apart, so no matter where you are you can reach Manchester or Birmingham in under an hour and London in less than 90 minutes. The North Midlands is surrounded by international airports. Manchester International,
Birmingham International and East Midlands International airport cater for a variety or European and World destinations. All of these links mean you’ll never be far from your favourite place.

HS2, a high speed train line, is to be completed by 2027 and will link eight of our major national cities and serve millions of people. Travelling for work or pleasure will become much easier. Our closest high speed station will be just 14 miles from Royal Stoke University Hospital in Crewe.
HS2 will vastly improve travel times to major cities such as Leeds, Manchester, Birmingham and London.

Founded more than 60 years ago, Keele University is nestled in 600 acres of countryside in the heart of the UK. Many of the students and a number of their staff live, as well as study and work at the university. It’s a big campus but a small and cosmopolitan community. The Faculty of Medicine & Health Sciences is one of the UK’s leading centres of applied research in primary care and is a national centre for studying musculoskeletal disorders. The Faculty offers a full range of clinical undergraduate, postgraduate and CPD courses. The quality of teaching in the Schools of Medicine, Pharmacy, Nursing & Midwifery and Health & Rehabilitation is reflected in subject league table positions and in feedback from the professional bodies responsible for
validating degree courses. Students benefit from the latest technology and facilities, as well as partnerships with NHS organisations across Staffordshire and Shropshire, including UHNM.

Staffordshire University recently celebrated its centenary. Founded in 1914, the University set out to be modern, relevant and vocationally inspired. Initially they challenged and pushed the mining and ceramics industry forward. Now it’s very different, and the university offers pre-registration degrees
in Adult Nursing, Children’s Nursing, Mental Health Nursing and Midwifery.
Students gain a professional qualification as well as your degree. Learning in their transformed Centres of Excellence in Stafford and Shrewsbury, students are supported in our new Clinical Skills Labs with the best possible learning facilities. Staffordshire University students gain experience in a variety of settings, including at a UHNM hospital and in the community.